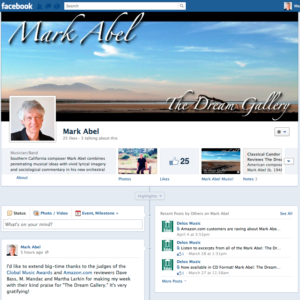 Southern California Mark Abel recently released his song-cycle The Dream Gallery on Delos, and it’s really starting to catch fire! And the best news, is that he has a Facebook Page! So head on over to Facebook.com/markabelmusic, give him a “Like,” and start exploring!

One fun aspect of building this new page was that it was the first “from scratch” Page that we had to put together in the new Facebook Timeline layout, which made for an interesting new look at the format. Since the page launched along side the digital release of the recording, it’s a nice plus to be able to watch the response to the album evolve, and the awareness of the composer himself evolve. From just having press pictures to this past week which marked TWO Global Music Awards and some downright RAVE reviews from folks on Amazon!

And don’t forget to check out the Mark Abel Music! Tab which brings in much of the content of www.markabelmusic.com into the Facebook Page!